Neapolitan presepio at the Carnegie Museum of Art in Pittsburgh 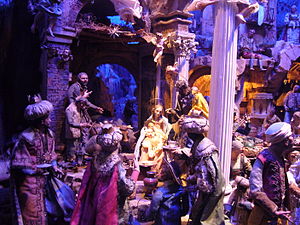 Detail of an elaborate Neapolitan presepio in Rome

In the Christian tradition, a nativity scene (also known as a manger scene, crib, crèche (/krɛʃ/or /kreɪʃ/, or in Italian presepioor presepe) is the special exhibition, particularly during the Christmas season, of art objects representing the birth of Jesus.[1]While the term “nativity scene” may be used of any representation of the very common subject of the Nativity of Jesus in art, it has a more specialized sense referring to seasonal displays, either using model figures in a setting or reenactments called “living nativity scenes” (tableau vivant) in which real humans and animals participate. Nativity scenes exhibit figures representing the infant Jesus, his mother, Mary, and her husband, Joseph.

Other characters from the nativity story, such as shepherds, sheep, and angels may be displayed near the manger in a barn(or cave) intended to accommodate farm animals, as described in the Gospel of Luke. A donkey and an ox are typically depicted in the scene, and the Magi and their camels, described in the Gospel of Matthew, are also included. Several cultures add other characters and objects that may or may not be Biblical.

Saint Francis of Assisi is credited with creating the first live nativity scene in 1223 in order to cultivate the worship of Christ. He himself had recently been inspired by his visit to the Holy Land, where he’d been shown Jesus’s traditional birthplace. The scene’s popularity inspired communities throughout Catholic countries to stage similar pantomimes.

Distinctive nativity scenes and traditions have been created around the world, and are displayed during the Christmas season in churches, homes, shopping malls, and other venues, and occasionally on public lands and in public buildings. Nativity scenes have not escaped controversy, and in the United States their inclusion on public lands or in public buildings has provoked court challenges.

We have over 40 years of experience in stocking and distributing products. Our processes are time-tested, which means we can offer you the most efficient and effective service.

High Quality We ensure that our stock has been manufactured using the highest quality materials and machinery so that you can feel secure in knowing that you’re purchasing a product that is reliable and durable.
Awesome SupportWe're committed to making sure you receive excellent customer service from us. Our in-house team is always willing to go the extra mile for our clients, so if you have a query, you can be assured that our experts will be available to help you with
Really Fast DeliveryOur knowledge and experience allows us to be one of the most reliable distributors around. We offer same day dispatch, which means you do not have to wait around for long delivery times.
30-Day ReturnsItems shipped from holylandshopping.com, can be returned within 30 days of receipt of shipment in most cases. Some products have different policies or requirements associated with them.
Secure CheckoutWe are concerned about the safety and security of your information. So we have put a number of technological protections in place to ensure that our transaction process is extremely safe and that your information is secure.